For All of You Out in Fundie Land...

I have one thing to say to you -


Posted by Kylyssa Shay at 8:45 AM No comments:

Email ThisBlogThis!Share to TwitterShare to FacebookShare to Pinterest
Labels: reality, science is real

No Atheists in Foxholes? 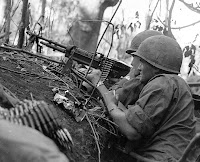 I know, I know, this subject has been beaten until dead. But people just keep saying it! I encounter this old hack at least once a week. I bumped into it again today over in the comments at Proud Atheists.

Do they think atheists would never decide to risk their lives in service of their country? Or is the general idea that mortal terror makes people think God is real? Neither of these rationales is very flattering to them or their beliefs.

One implies that they would only ever consider risking their lives for any reason unless there was some kind of out or "do over" available to them. The other implies that the only reason for their belief is their overwhelming fear of death. When people do things out of terror, they usually don't brag about it - unless, of course, they are talking about religion.

I've been quite reasonably sure I was facing death on more than one occasion and I can tell you, it didn't make me suddenly think God was real. At no point did I ever think, "Well, golly, I'm about to get snuffed so God must be real." It's not that I wasn't scared enough, I assuredly was completely terrified and bloody sure I was going to be killed. It just didn't change what I thought was real and what I thought was not. Why would it?
Posted by Kylyssa Shay at 8:36 PM 2 comments: